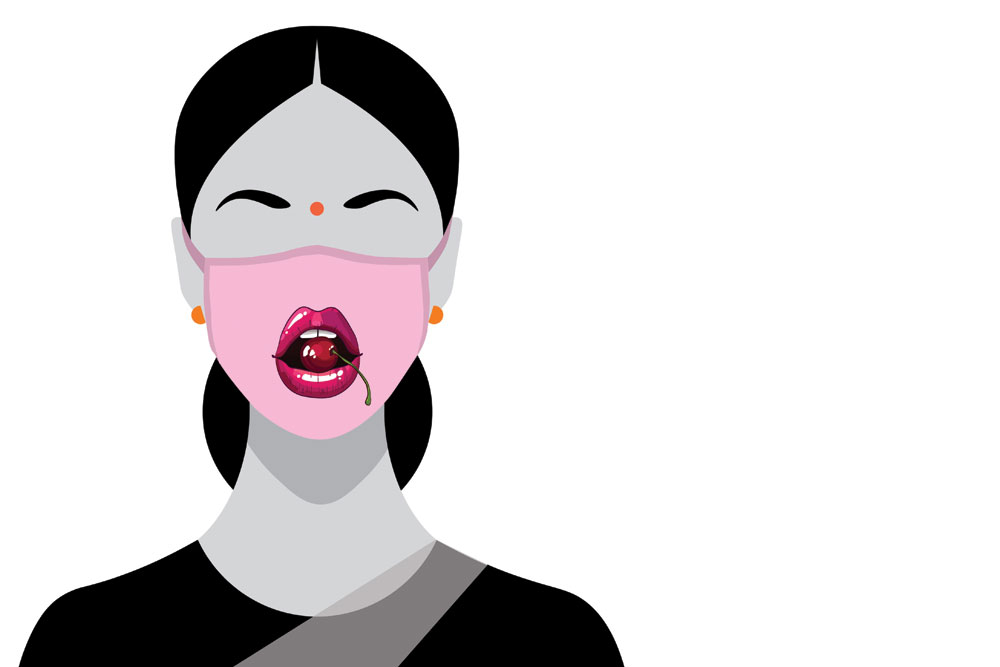 More Indians, especially women from small towns, are craving sexual fulfilment with or without companions. A recent survey done on 2.2 crore online shoppers of sex toys in India by Thatspersonal.com, which sells such products, confirms the trend. The report shows that the Covid-19 lockdown has not only been a blessing in disguise for the sex-toy industry, but also an opportunity for young people, irrespective of gender, to tap new ways of seeking sexual pleasure.

In some tier-3 cities, women bought more such toys than men, indicating that even in the country’s non-metros, more young men and women want to break free of norms that curb carnal joys. The survey, titled India Uncovered: Insightful Analysis of Sex Products’ Trends in India, is the fourth such report by Thatspersonal.com. Small towns that saw women make more purchases than men include Vijayawada (Andhra Pradesh), Jamshedpur (Jharkhand) and Belgaum (Karnataka), which are rather more famous for temples or industries than sensorial stimulations.

The key takeaway from this report is that regardless of companionship, women seek sexual satisfaction and are aware of how to get it. While this trend is true of men, too, women are increasingly emboldened to take decisions on their own, thanks in general to the conveniences of the internet and discreet e-shopping options.

Remarkable about that lost glory is that there was once a great emphasis on making women happy under the covers or facing consequences outside of it. Now, Indian women seem to be coming out of the woodwork of domestic and familial entrapment in a journey of rediscovery and reimagining freedom. Being independent and in command of the situation comes on top here. In the days of yore, if our mythology is anything to go by, women were vocal about their sexual needs and unabashed in their demands. Most even got what they asked, at least among a certain section of women who commanded respect and equality. The story of Urvashi, the celestial nymph who desired Arjuna, is a memorable one. Urvashi cursed Arjuna to become a eunuch for the rest of his life for spurning her advances. Arjuna’s dilemma was understandable: he did not want to get into a physical relationship with a woman considered the mother figure of his clan. But Urvashi unleashed her wrath on him. Luckily for Arjuna, his father, Indra, the king of the gods, intervened and managed to convince Urvashi to limit his eunuch curse to one year. It turned out to be useful in the 13th year of vanavasa of the Pandavas when they had to go incognito. Arjuna became a eunuch, named Brihannala, at the court of Virata and taught Uttara, his daughter, dancing.

Historian Nayanjot Lahiri, a noted scholar of ancient India, wrote two years ago in her book Time Pieces: A Whistle-Stop Tour of Ancient India that ancient inscriptions across the subcontinent, especially those in the caves of central and north India, reveal heterosexual as well as same-sex postures of intercourse that lay stress on providing women pleasure. ‘Such representations were made part of the repertoire of art in clay a couple of thousand years ago. Small terracotta plaques show couples copulating: a first-century example from Kausambi in Uttar Pradesh renders a couple in sexual intercourse with the legs of a presumably climaxing woman raised as high up in the air as she is emotionally.’ Lahiri rues that ancient India is a far cry from ‘the censoriousness and prurience that now dominate the Hindu ethos and curtail sexual freedom’. She notes in the book that it is ‘a great pity that the mythic glories of ancient India so fancifully touted by right-wing Hindus now fail to include the golden age of sexual enjoyment’.

The Covid-19 lockdown has not only been a blessing in disguise for the sex-toy industry, but also an opportunity for the youth to tap new ways of seeking sexual pleasure

Some historians and sociologists have blamed the caste system, which insisted on societal rigidity and nixed freedom of choice for a majority of Indians, as the reason why sex got a raw deal in Indian life over centuries. Brahminism certainly disallowed a vast majority of people from enjoying unrestricted freedom, and therefore their sexual exploits as well. (A small section of India, however, such as the royals, remained insulated from such provisos imposed by man on man and woman.) A few other historians blame foreign invasions of the medieval period and the prudishness of Victorian British imperialists who came later for throwing Indian men and women into a world of curtailment and constraints.

Clearly, organised religions insisted on control of emotions, but sexual repression is something that needs a closer study of India’s long battle between eroticism and asceticism, the latter promoted by monks of various Buddhist and Hindu orders. Pleasure became something to be looked down upon even when in moderation. Renunciation became an overarching theme of Indian society.

While Hinduism encouraged brahmacharya as one of the essential stages of life, Jainism and Buddhism, which had tremendous impact on Indian society, promoted lifelong renunciation of worldly pleasures, just as Christians did. The Romans had looked down on celibacy and virginity as an aberration, but with the rise of Christianity, the idea of extreme self-restraint, also called continence, began to spread wider. In an interview to Scroll.in four years ago, psychoanalyst Sudhir Kakar said that India became a sexual wasteland “due to a combination of British prudery, adopted by the upper classes in what may be called an ‘identification with the aggressor’, and our own deepseated strain of Brahminical asceticism, held aloft through the centuries by the Hindu version of the poet William Blake’s ‘priests in black gowns… binding with briars my joys and desires’”.

In Hinduism, over time, renunciation was also seen as a way to conserve energy for other purposes that include attainment of spiritual goals. Mohandas K Gandhi, for instance, drew inspiration from religions and took a vow of celibacy and later devoted his time to fight a non-violent battle, which he termed ‘satyagraha’, to win freedom for India from British rule. He had conceived and practised this idea back when he was a prosperous lawyer in South Africa where he honed his skills as a politician who championed the cause of ethnic Indians there. His obsession with gaining control of his basic instincts, including sexual appetite, led him to try controversial experiments such as sleeping naked with young women to test himself.

If the rays of hope during the lockdown in India are anything to go by, the country may be at an inflection point of what is euphemistically called ‘self-reliance’ in seeking pleasure. Between March and July this year, sales of sex toys rose 65 per cent year-on-year. That more women and men are climbing the social ladder may fuel more sexual freedom, expect behavioral economists and businessmen. Escape from poverty and existential struggles prompt people to look for hobbies as well as avenues to pamper themselves. Miguel A Capilla Moreno of Fleshlight International, who manages the European business of the Austin, US-based maker of dildos and artificial vaginas, says the lockdown saw sales of the company rise as high as 60 per cent on the Continent, suggesting a global trend. He tells Open that this could be because people are forced to be single and away from partners due to the lockdown. He adds that despite the lockdown being lifted in most parts of Europe, the sales have not shown any slide. “Human behaviour is such that when people get used to certain pleasures, they stick to it long after the situation that forced them to do something has changed,” he says.

Samir Saraiya, who owns Thatspersonal.com, offers a similar logic. “We had a problem with the sales of lubricants because Indians did not seem to appreciate it much. But after we started giving small sachets of it for free when they bought other products, they returned to buy lubricants. They needed to acquire a new habit and then discovered the fun,” he says.

According to his company’s survey, the sex-toy business in metros grew by 24 per cent, by 29 per cent in tier- 2 cities and by 33 per cent in tier-3 cities, indicating greater demand in the hinterland. The top products among women in small towns were massagers. Purchases were highest in Maharashtra, Karnataka and Tamil Nadu. More people bought electric massagers, penis pumps and lubricants than other products. The survey states that Assam is the ‘kinkiest’ state in the country ordering large numbers products for bondage, discipline (or domination), sadism and masochism, popularly known as BDSM. Sales were highest in Mumbai during the lockdown, which was followed by Bengaluru and Delhi. Lucknow, Jaipur and Chandigarh posted high sales among tier-2 cities. Surat made the most expensive buys with an average per capita order of Rs 3,900. “More people are shedding their inhibitions and are open to experimenting with these products,” Saraiya says. True, sales through Amazon and other online platforms have also seen a rapid growth, says a senior executive in the industry, with people postponing spending on other segments and kitchen tools and thanks to what he calls “lockdown lust”.

Open had earlier reported on Indians’ quest for modern medicines and traditional cures to enhance sexual prowess. There is greater access these days in the country to foreign drugs such as Pfizer’s trademark Viagra, which treats erectile dysfunction, and cheaper generic variants. Indians are also curious about homegrown products that enhance sexual performance. Open had reported earlier about a wellknown south Indian actor known to experiment with various potions that traditional physicians prepare for him to increase his sex drive. “Aswagandha and Chittamrit are very much part of this lehyam [tonic]. Then there are other normal raw materials such as cinnamon, fenugreek, saffron, milk, honey, shallots and so on. Temperature management is crucial to making this formulation. We have some of the best traditional vaidyas [doctors] preparing it,” a person close to him had told Open (‘Smell the Beetle and Play’, January 8th, 2018).

Online shopping scores in this matter because it offers buyers anonymity. Before the advent of sex shops online, people often ended up being taken for a ride by crooks and quacks who promised them the moon while bamboozling them for the wonder drug and for keeping the information a secret. As of now, complaints can be easily made to companies that are accountable for the quality and validity of their products. Porn viewership has also gone up across genres and genders. Online buys also mean that people no longer have to queue up outside shops and face the embarrassment of being seen and noticed as buying products of their choice, be they sex toys or porn videos. As the latest lockdown survey confirms, a majority of the buyers were between 25 and 34 years old. Interestingly, these Indian millennials are no longer tightlipped about their sexuality and preferences. The lockdown has provided Indians—just as others elsewhere—an opportunity to find ways to enjoy themselves in solitude. With restrictions and social distancing guidelines set to ease, they are expected to carry the new learnings to spice up intimacy and companionship. Behavioral economists and psychiatrists also anticipate that people are likely to spend more time on their sexual wellness, buoyed by the experience of the lockdown, for elaborate experiments in bed.