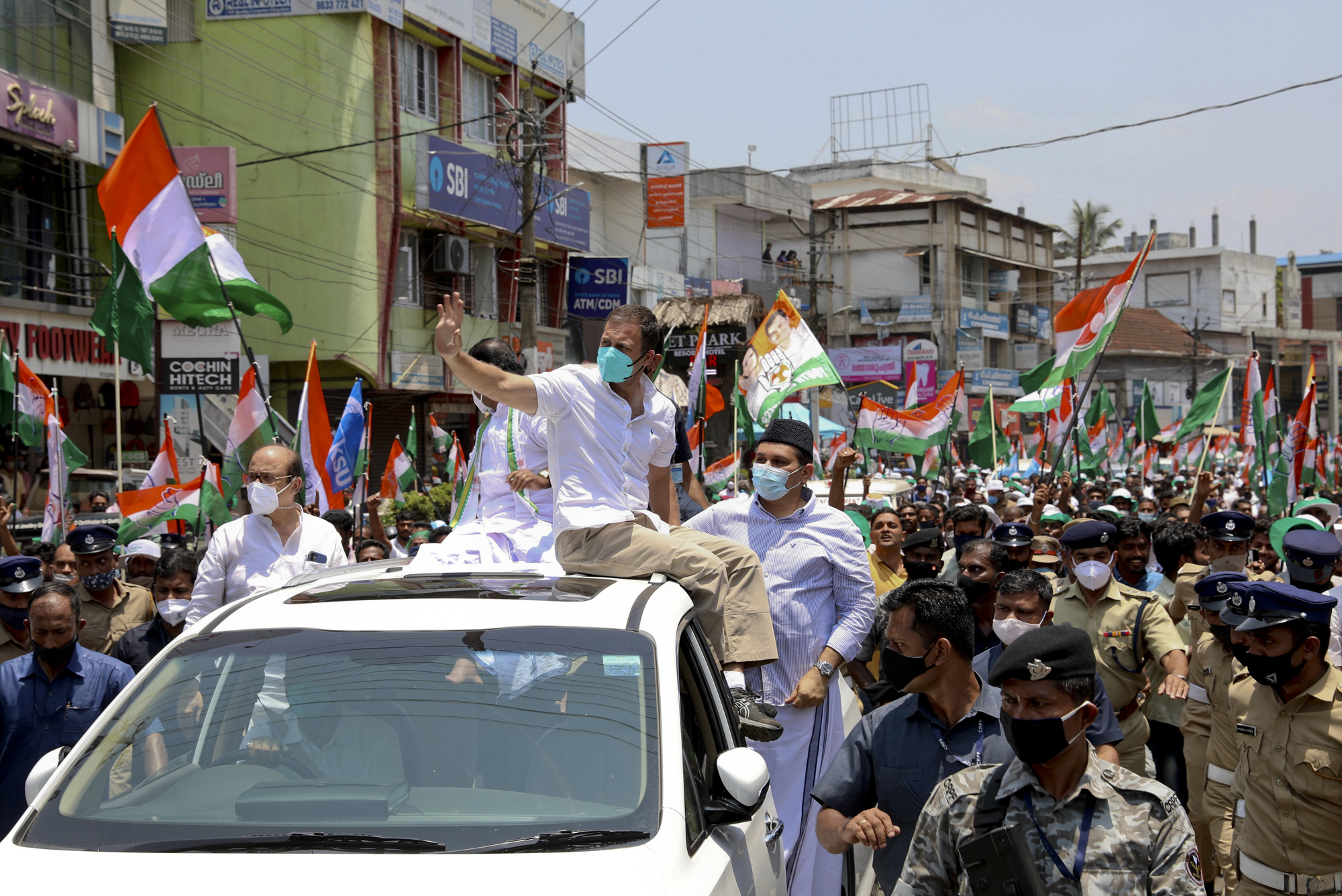 Rahul Gandhi at a roadshow at Sulthan Bathery, Kerala, April 1, 2021

That Congress saw Kerala as an island of hope for its first family, the Gandhis, was evident in the 2019 Lok Sabha polls. Sensing a huge setback in their pocket boroughs in Uttar Pradesh, Congress scion Rahul Gandhi chose to contest from a second seat, Wayanad, in northern Kerala. Suggestions that he should contest from Karnataka were overruled because many handlers felt that only Kerala offered a sanctuary for him and that the backing from ally Muslim League’s voters would do the trick.

The family’s fears came true when BJP’s Smriti Irani trounced Rahul in Amethi, once a Congress bastion that in the past was represented by his father, uncle, mother and himself. On the other hand, in Kerala, he proved to be a big hit and the campaign that projected him as the next prime minister surprisingly clicked. As a result, the Congress-led United Democratic Front (UDF) swept the polls in the state, winning 19 of the 20 Lok Sabha seats.

The last refuge is under threat now as the results of the Assembly election in Kerala prove. Notwithstanding the Gandhi siblings’ road shows, college visits and corner meetings that attracted tremendous media attention, Congress has done very badly in a state that typically throws out incumbents. The ruling CPM-led Left Democratic Front (LDF), under the leadership of Chief Minister Pinarayi Vijayan, has returned to power in a historic win although the government was buffeted by corruption charges that are being examined by Central agencies.

Lack of cohesion and the absence of a strong chief ministerial candidate, besides trust factors, are some of the major reasons for the UDF’s resounding setback this time round. But the defeat also puts the spotlight on the erosion of confidence in the Gandhis who helped snatch a mammoth victory in 2019. Barely two years later, that fait in the Congress high command and India’s Grand Old Party’s first family has clearly vanished. Rahul and Priyanka Gandhi Vadra were brought in with much fanfare to revive Congress’ campaign and to drum up its poll prospects in the state. With Congress miserably trailing expectations even in this oasis of a state, the knives are going to be out seeking accountability for the loss and to refurbish the party to make it a more democratic entity capable of winning polls. Those who are expected to resume and sharpen their attack are a grouping called the G-23 which comprises 23 senior leaders, including veteran former Union ministers, office bearers and chief ministers. They had demanded an organisational rejig to regenerate the party right from the grassroots level. They resent the party being confined to Delhi.

They had lain low for some time now, ostensibly maintaining party discipline during the election campaign. The sidelining of Ghulam Nabi Azad, a member of G-23, has further delayed a showdown. Now that the Gandhi siblings have squandered away an opportunity in Kerala, the calls for reforms to put Congress back on the winning track are only expected to get shriller, much to the anguish of criticism-weary Rahul Gandhi and the rest of the family.

To add to the woes of the Gandhi family which has concentrated power in its hands, the party tried unsuccessfully to swing votes in its favour in Assam through various promises in its manifesto that included a legislation to nullify the Citizenship Amendment Act (CAA). Besides, it also vowed to provide jobs in government and the private sector and other sops. The manifesto also said it would waive the debts of farmers. The family had also deputed Chhattisgarh Chief Minister Bhupesh Baghel to camp in the state to see to it that all financial and other requirements of the state unit were met. But ultimately, the strategy didn’t click. In addition to this, party leaders close to the high command are crestfallen about the loss in Puducherry as well as the humiliating meltdown in West Bengal. In Bengal, the situation is so grim for the party that even in its worst years, districts like Murshidabad, Malda and places like Raiganj had stood by the party, but not this time. The party has literally disappeared in the east. The sole consolation in this election season for Congress is its victory in Tamil Nadu, standing on the shoulders of Big Brother DMK.