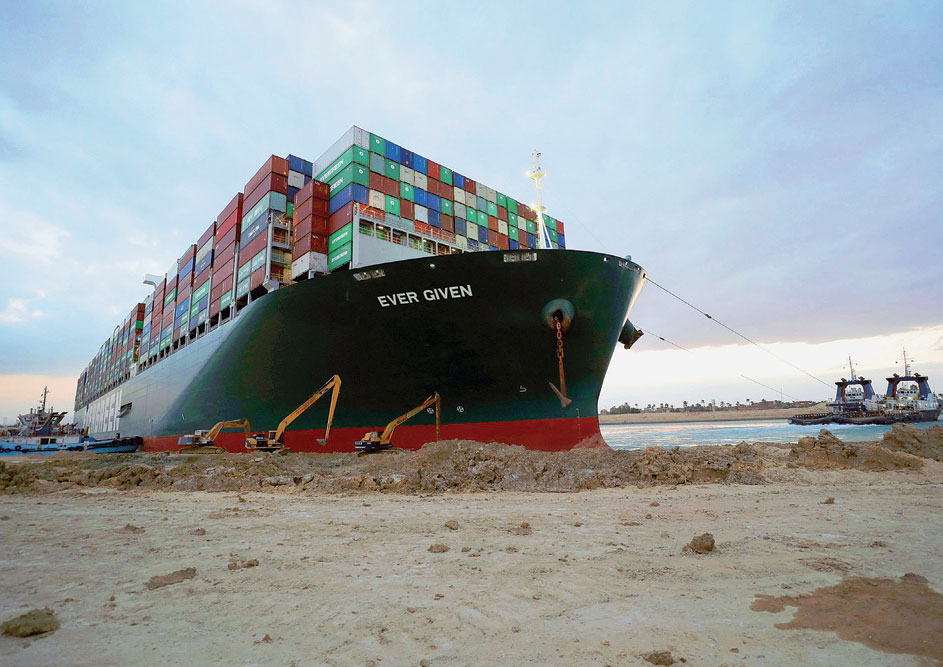 The Ever Given stranded in the Suez Canal

NOVELIST AND SEAFARER Joseph Conrad had sailed through the Suez Canal more than once in his lifetime. A lover of the deep seas, he had called the ocean “a thing to love, a thing to fear”. He had a quibble over this greatest maritime project of the 19th century, which collapsed distances and made trade quicker. Unlike today’s historians like Valeska Huber, chronicler of the early Suez Canal who finds this busy transit route a ‘connection’ as well as a ‘boundary’ for enabling supply and also disrupting maritime traffic, Conrad’s regret was more old-school and romantic. He thought of the sea as an enchanting phenomenon that is “glorious in its smiles, irresistible in its anger”, but only until “the time when the French mind set the Egyptian muscle in motion and produced a dismal but profitable ditch.” His comment about the canal built in 1869 linking the Mediterranean Sea with the Red Sea was seen as unkind at the time.

The Suez Canal, which accounts for one-tenth of global sea trade, proved to be a ‘ditch’ and a ‘boundary’ when for six days Ever Given, an ultra-large container ship (ULCS) built by a Japanese company, operated by a Taiwanese company, managed by a German company registered in Panama, and manned by an all-Indian crew, ran aground in the Suez Canal, ostensibly on account of a wind, and brought to a halt cargo movement in one of the busiest sea trade sectors, triggering fears of huge trade imbalances, price fluctuations and commodity shortages from March 23rd to 29th. The ship’s draft, meaning the depth from the surface of water to its bottom, was 21 metres while that of the canal, barely, 24 m.

Close to 90 per cent of the world’s goods are transported by sea (over 70 per cent are carried in containers) and the size of the containers is becoming bigger and bigger, and yet, ironically, 21st century shipping technology still depends on old infrastructure, and in this case, the Suez Canal, a 19th century engineering marvel.

The ‘profitable ditch’ became a loss aggregator when Ever Given got stuck there, resulting in a massive jam of sorts of ships and requiring salvage crews and tugboats to work day and night to refloat the container. Diggers had to remove 27,000 cubic metres of sand to a depth of 18 m. Details of the damage to the ship will be clear only after a thorough inquiry as is the norm in the shipping industry.

Lessons to learn from this incident that is sure to become a case study taught in marine engineering courses and perhaps also a nerve-wracking Hollywood movie are many, logistics experts, historians and engineers aver. In her book Channelling Mobilities: Migration and Globalisation in the Suez Canal Region and Beyond, 1869–1914, Huber talks of the canal being a ‘double-edged sword’ and a ‘global accelerator and retardant’. There was also a resentment about the slowness in the canal within two decades of its commissioning, confirming that the complaints about this manmade link between seas are almost as old as the canal itself.

Huber highlights what the late 19th century Indian reformer Behramji Malabari had to say about it: “The Suez Canal is a splendid piece of work; but the passage through it is dreadfully slow. It becomes too monotonous as we drag our way painfully along. The wild and weird-looking country beyond, on both sides, interests me more than the immense feat of engineering before me. Whilst the steamer is crawling, you more than once realise the force of the expression, ‘dull as ditch water’. It is seldom, indeed, one finds that phrase so vividly illustrated as in the Suez Canal.”

It is not that the 193 km-long canal hasn’t seen enough disruptions in the past, although not of this scale, simply because of the size of Ever Given, which is a container with a capacity of more than 20,000 TEU (a unit of cargo capacity). As Huber says, “Fears of disruption were part of the canal’s history from the outset. In 1885, a collapsed dredger led to a 12-day interruption of traffic and a backlog of 123 ships.” Wars, colonialism and pandemics have also hobbled trade in the canal.

Globalisation has made the consequences of trading through such narrow sea links dearer and problematic, as this incident confirms. UK-based industrial researcher Rory Hopcraft spotlights a bigger worry: the size of the ships being made. “We are becoming increasingly reliant on bigger and bigger ships sailing through various routes that are open to disruption of various kinds.” He emphasises that the industry should be thinking far ahead and considering the risks that it could face in the years to come.

Typically, crew costs account for 60 per cent of a ship’s operating costs and, therefore, profits are made thanks to economies of scale—which means you make more profits when you keep manpower almost the same as that of smaller ships and carry more cargo in ULCSs. Some of the ULCSs awaiting commissioning are of bigger capacity than Ever Given. Meanwhile, the industry has seen massive consolidation with the top 20 players accounting for 90.6 per cent of global trade compared with 39 per cent in 1990. This is why prices have fallen, making transport of goods in containers tempting for traders. For instance, a cargo weighing 1.8 tonne to be transported from Shanghai to Rotterdam can be carried on these ships, or even smaller ones for a price as low as $600. In comparison, the air freight charge would touch $12,000. A clearer picture would emerge when you compare these stats by the World Maritime University: In 50 years to 2018, US retail prices have risen by 700 per cent, but in comparison, cargo shipping costs rose only by 70 per cent. In other words, $1,000 in 1980 has the buying power of $3,050 in 2018 in the world of shipping trade.

But there are bottlenecks, literally, and this cannot go on without inviting more such disasters and gargantuan losses, especially for insurance corporations that may go belly up if accidents occur on account of weather. “Infrastructure, both ports and canals, are not able to accommodate much larger vessels than we already have,” explains Hopcraft. Huber offers a grave warning of what lies in store, “A single container ship blocking the Suez Canal for almost a week proves the point of studying bottlenecks and chokepoints to understand globalisation processes, past and present, rather than focusing on connections and smooth circulation.” Countries in the East are becoming increasingly connected to trade routes as maritime hubs with economies being dependent, at a fast clip, on sea trade. Such disasters could wreak havoc on these economies.

Adam K Prokopowicz, a former associate director at National Ports and Waterways Institute in the US, first coined the term ULCS. After the Ever Given incident, he wants everyone to stay calm and wait for the investigation to get over. After all, an analysis of Voyage Data Recorders (VDRs), equivalent of a black box in ships, is sure to give the cause of the accident within the first 12 hours. Which means Ever Given’s technical assistants already have the idea of what went wrong. Prokopowicz says his initial thoughts are that the accident could have happened because of some of the following reasons: “A sudden increase in wind, mechanical error, an error in positioning containers on the vessel [in layman’s terms—professionally, it is stowage—maybe, somebody made a faulty stowage plan]. I believe that the vessel met all the requirements to enter the canal. But I am an observer, not an investigator.”

Prokopowicz has some recommendations in this context that could appear utopian at this stage. “We need to rethink the principles of globalisation, make our consumption moderate, and reduce transport dependency of economies.” He, however, hastens to add, “Let’s not panic because of one accident, but take it seriously. We built larger vessels only because there is a demand for them. Maybe, we should also take a look at alternative and innovative ways of moving freight.” An example he suggests is Cargoloop—a freight version of Hyperloop, a proposed form of ultra-rapid transport. He says it could be an alternative to large vessels, maybe, 30 years from now. “But we need to think about that now,” he warns.