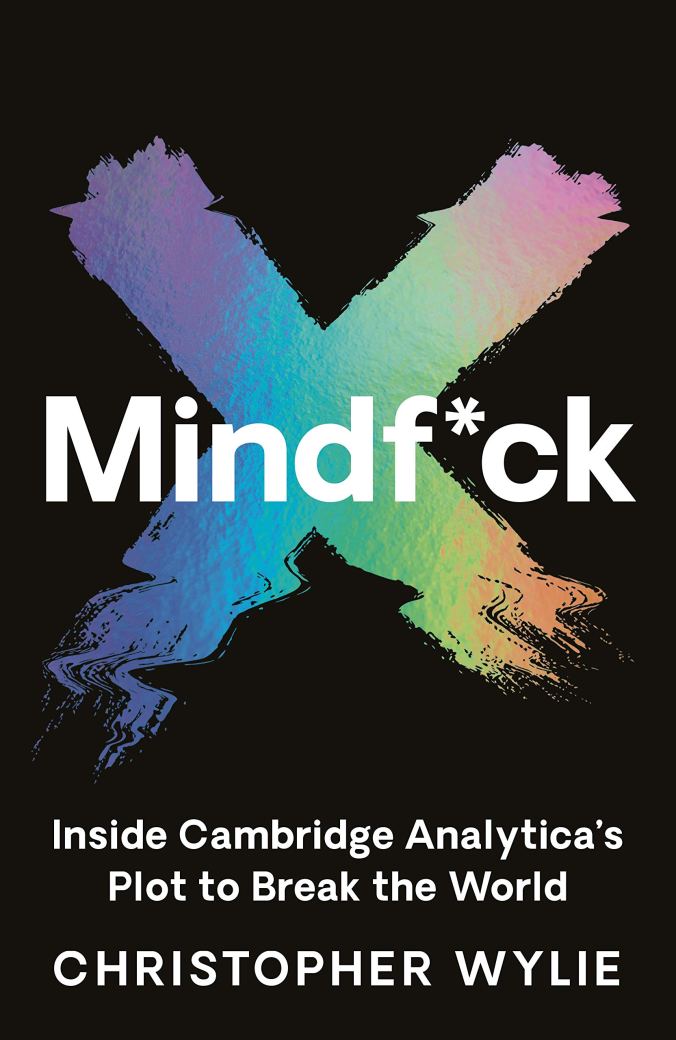 Two sentences from its pages capture the spirit of this book by the man who is often called ‘the first great whistleblower from the millennials’s generation’. Here goes one of them: ‘Inside Cambridge Analytica, I saw what greed, power, racism and colonialism looks up close.’ And this is the other: ‘The story of Cambridge Analytica shows how our identities and behaviour have become commodities in the high-stakes data trade.’

Thirty-year-old Christopher Wylie—the former Cambridge Analytica analyst credited with bringing to the now tainted British political consulting firm rigorous data crunching and micro-targeting of voters—tells us in this 269-page, un-putdownable book the inside stories of deception and lies that helped the campaign and election of Donald Trump as President of the US in 2016; the outcome of the Brexit referendum in which British citizens decided to exit the European Union the same year; the Russian intervention in American and world politics through hacking, funding and digital meddling; the famous and unsung players of the Alt-Right who wanted to shape the world according to their whims by mining and manipulating data; social media giant Facebook; Wikileaks and so on.

Wylie earned international acclaim when in 2018, two years after Trump’s election, he disclosed to The Guardian and two other media groups the secrets of how Cambridge Analytica worked towards ensuring how the Republican candidate won in a highly racially polarised American presidential election. The world came to know that the political consulting company had in its possession, arguably, private details of 87 million users of Facebook that they used for micro-targeting of voters. When Wylie described to The Guardian’s investigative journalist Carole Cadwalladr what exactly Cambridge Analytics was, he told her bluntly, “It is Steve Bannon’s psychological mindfuck tool.”

Wylie started working for Bannon—former Trump campaign manager, far-right nationalist and political strategist who was then destined to serve as White House Chief Strategist for Trump for a brief period after the Presidential election—six years ago, when he was just 24. He ended up doing all that by sheer accident. Born in 1989 in Canada, Wylie has always been a liberal. In fact, Wylie, featured in the documentary released this year, The Great Hack, had started working with liberal democratic politicians early in life.

When he was just out of school, aged 16, Wylie, born in Victoria, British Columbia, to physician parents, moved to Ottawa to volunteer for liberal democrats in his home country. But senior liberal democratic colleagues raised eyebrows when he began to work on a data-harvesting operation to secure political gains for his party. Majority of them viewed his plan as an invasion on people’s privacy and, therefore, Wylie had to drop his assignment midway. It was exactly a more sophisticated version of this project that would later impress Bannon.

In 2008, Wylie worked briefly with Obama campaign adviser Ken Strasma, picking up the basics of micro-targeting of voters. He explains this complex phenomenon called micro-targeting in the book. He says it is where ‘machine-learning algorithms ingest large amounts of voter data to divide the electorate into narrow segments and predict which individual voters are the best targets to persuade or turn out in an election’. He notes that when he returned to Ottawa after the 2008 US presidential election—which overnight generated interest among political parties all over the world over strategies ‘powered by national targeting databases and big digital operations’—everyone was expecting him to tell them about that campaign’s ‘flashy branding, graphics and viral videos’.

He writes, ‘Instead I wrote about electoral databases, machine-learning algorithms, and how these things connected to one another through software and fundraising systems. When I recommended that the party (liberal democrats) invest in databases, people thought I’d lost my mind… Obama was their benchmark for a ‘model’ campaign, and they were taken with high cheekbones and pouty lips, not the skeleton and backbone that made all that possible.’ In Canada, he started working for liberal democrats in a political environment that had multiple parties in the fray, unlike in the two-party-dominated US. He was getting obsessed with local politics. It was then that a group of older, sympathetic women from his team took him out one day and told him, “Listen. Don’t be like us. Go, be young. Get the hell out of here before it traps you”.

Wylie took them seriously and in 2010, he left Canada for good to study law in the UK at the London School of Economics. He recalls later that although he had left Canada to escape politics, it was only a matter of time before he was drawn into it—and this time—in the UK. Within a few days of his arrival in London, he got a call from someone close to the Liberal Democratic Party who had got his name and contact from an acquaintance. And very soon, he ‘flourished’ in London, he writes. He was studying law and working in Parliament. But he would soon leave the job because his style was not acceptable to Liberal Democrats who were still interested in pamphlet-oriented campaigns. A few months after he left the job, in the spring of 2013, Wylie writes in the book, he got a call from a party adviser about SCL Group, which, he was told, was looking for ‘data people for some behaviour research project’ involving the military.

In this book, he recalls that occasion, ‘Fresh out of university, I had taken a job at a London firm called SCL Group, which was supplying the UK ministry of Defence and NATO armies with expertise in information systems… But through a chain of events that unfolded in 2014, a billionaire acquired our project in order to build his own radicalised insurgency in America. Cambridge Analytica, a company few had ever heard of, a company that weaponised research in psychological profiling, managed to turn the world upside down.’

The book starts with a day in the June of 2018 when he walked down several rooms and corridors of US Capitol to offer evidence to the United States House Permanent Select Committee on Intelligence ‘tying Cambridge Analytica to Donald trump, Facebook, Russian intelligence, international hackers and Brexit’. Three months earlier, The Guardian, The New York Times and Channel 4 had published reports based on his shocking revelations.

Wylie warns us in the book, ‘Let’s be clear. These operations are not some kind of therapeutic counselling; they are a form of psychological attack. It is important to remember that, in a military context, the target’s personal agency or consent is not a concern. The target is the enemy…with the advent of social media, suddenly military and security agencies had direct access to the minds and lives of guards, clerks, girlfriends and runners of criminal and terrorist organisations all around the world.’

The book offers us a startling yet close glimpse into how digital predators finagle personal data and manipulate human minds. Wylie’s arguments on how social media platforms activate ‘ludic loops’—that forces you to do the same action in cyber space over and over anticipating an infrequent reward—to influence public opinion besides zealously employing other tricks are compelling. Cambridge Analytica generously replicated such social media models in its campaigns.

Writes Wylie, ‘In the summer of 2014, Cambridge Analytica began developing fake pages on Facebook and other platforms that looked like real forums and news sources… The firm did this at the local level, creating right-wing pages with vague names like Smith Country Patriots or I Love My Country…Once a group reached a number of members, Cambridge Analytica would set up a physical event… People would show up and find a fellowship of anger and paranoia. This naturally led them to feel that they were part of a giant movement, and it allowed them to further fend off one another’s paranoia and fears of conspiracy.’

Mindf*ck dwells at length on CA’s machinations in elections held in other countries and talks about suspicious-looking clients that kept arriving at CA’s offices (meaning Russians). In the US, Wylie says, ‘Steve Bannon aimed to affirm the ugliest biases in the American psyche and convince those who possessed them that they were the victims, that they had been forced to suppress their true feelings for too long.’

Similar passions are being roused elsewhere in the world too, including in India. Which is what makes Mindf*ck, written by the man who is also described by admirers as “the pink-haired, nose-ringed oracle sent from the future”, a must-read for understanding the world we live in from the corridors of power. At a time when we are faced with excessive toxicity in international and local politics, this stellar work takes us on a guided trip through the minds of some of the most divisive characters of our time and their wicked plots to reap gains from chaos.