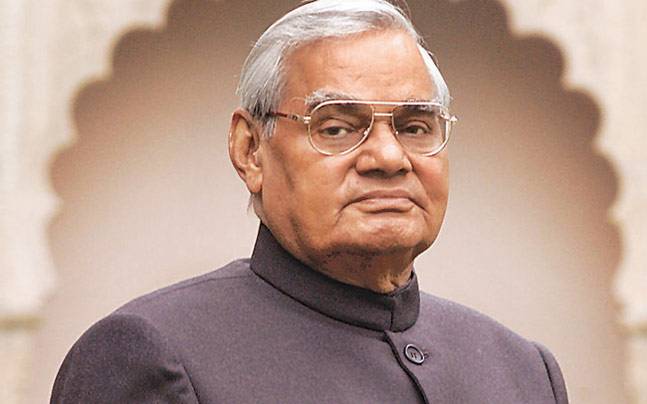 They say Atal Bihari Vajpayee was the right man in the wrong party. He wasn’t. Academics and independent political analysts such as Robin Jeffrey and Vajpayee’s contemporaries in politics remember him in the 1960s as a young, firebrand leader of the Hindutva cause, someone capable of the most offensive of anti-Muslim statements.

A man groomed in the RSS nursery and prior to that in Arya Samaj, Vajpayee never let go of this habit of overt display of militant nationalism, though he did allow it to lie dormant as he gradually became deeply entrenched in politics centered on Delhi and the Indian Parliament.

Parliament, we must remember, shapes any politician in more ways than he or she shapes Parliament. The former prime minister Vajpayee, the only non-Congress premier to complete a full term in office, was also a product of the now-reviled Lutyens’ Delhi, having lived the life of a Parliamentarian from 1957 to 2004. There were brief interludes when he lost elections in 1962 and 1984, only to enter Parliament through the Rajya Sabha.

That also meant that, unlike present Prime Minister Narendra Modi who entered Delhi-centered Parliamentary activities much later in life when he was 63, and who had spent his time as a provincial leader and Gujarat chief minister for 13 years until then, Vajpayee allowed himself to be co-opted into national mainstream politics and Delhi’s charmed circle of intellectuals and elites when he was still in his 30s.

He contested the election to the Lok Sabha first in a by-poll in 1953 but lost. Four years later, he contested from three seats – Balrampur, Mathura and Lucknow – and won one. Balrampur was to be his ticket to Delhi.

Modi and Vajpayee were both shaped by RSS indoctrination in shakhas at a young age. While Modi’s father was a tea seller, Vajpayee’s was a primary school teacher. Both prime ministers cut their teeth in politics with their oratorical skills, though they were vastly different in style, and their strong tirades against Muslims.

Vajpayee lived in a different era and had the good fortune of interacting with the best parliamentarians in India’s history and the most liberals among them. The biggest lawmaking body of the country provided Vajpayee at an early stage of his career with an opportunity to understand his and his party’s limitations and then go beyond them.

In fact, Vajpayee was also influenced in his student days by communism that had buffeted the world in the first half of the last century, especially after the fall of Hitler’s Germany in 1945. He was therefore open to change and allowed himself to be embraced by the broadmindedness of his senior luminaries in Parliament. Pandit Jawaharlal Nehru’s forbearance and genial ways to the most virulent of criticisms, launched by the likes of Vajpayee himself, certainly were destined to have a long-standing effect on the angry young parliamentarian with an RSS background.

We wouldn’t know whether it was for political expediency or out of absolute conviction, but Vajpayee soon began to straddle the fence of Nehruvian liberalism on one hand and Hindutva politics of the RSS kind on the other. Perhaps he found it to be the best way to influence people outside the influence of Sangh politics at a time when Congress was a dominant political entity. The outcome was that he made right-wing politics more palatable to a larger section of Indians.

To his credit, Vajpayee always experimented with various themes in politics, from militant nationalism to advocating that the Bharatiya Janata Party (BJP) should be nurtured as a democratic electoral alternative to the Congress. He wrote an article in 1979 seeking the replacement of Hindutva with Bharatiya, a broader slogan to accommodate people across religions and pull in their support for a new political entity.

The RSS back then understood his utility as a face – or a mask (mukhota) as RSS ideologue KN Govindacharya called him later – that could spearhead the Hindu nationalist party at a time when its acceptability was much lower than it became later on.

There are those who argue that Vajpayee remained committed to RSS’s bigoted brand of nationalism all through his life, never stepping in to stop its wily ways in the height of the Ram temple agitation and later when Gujarat saw a communal pogrom in 2002 when he was Prime Minister.

Some historians argue that Vajpayee was spared criticism because of his substantial connections with leaders in high places across the political spectrum and his upper-caste social background that offered him immunity from diatribes back then.

It is true that Vajpayee made brief excursions to the hardline Hindutva camp even as he remained a liberal or a moderate face of the Hindu nationalist movement he was part of, first in Bharatiya Jana Sangh and later in the BJP. He is said to have influenced the riots in Nellie in Assam thanks to an inflammatory speech against “outsiders” in 1983. He had come under attack over this issue even in the 1990s in the Lok Sabha.

Much earlier, on 14 May 1970, he was confronted in the Lok Sabha by then Prime Minister Mrs Indira Gandhi for his explosive remarks on Muslims. He said in Parliament in the aftermath of the Bhiwandi riots that year that Muslims were getting more and more communal and therefore are inviting ‘reaction’ from Hindus who were, according to him, turning aggressive in response to Muslim behaviour.

Mrs Gandhi countered him to allege that RSS and Jana Sangh were behind such riots that triggered communal polarization. She also requested that Vajpayee’s remarks not be expunged because she saw “naked fascism” behind those words. She added that she was glad to see that Vajpayee had come “overground” with his true brand of politics.

Again, it emerged later that on 5 December 1992, he was in Aminabad in Lucknow where he met RSS Karsevaks and, to fervent cheers from the crowd, he said naughtily that for rituals to be performed in Ayodhya, the ‘earth has to be levelled’, manifesting how differently he spoke to different classes of people, a habit that reflected his cunning as well as a largely non-confrontationist attitude. He left Lucknow shortly and did not go to Ayodhya (where the disputed structure was demolished on 6 December 1992), in what his rivals sometimes say was a ruse to safeguard his moderate image.

But that image came in handy for the RSS. After all its top leaders were arrested and many state governments headed by the BJP dismissed, they found a saviour in Vajpayee. He was the one who led the campaign against “murder of democracy” in the months to come.

Towards the end of his career, however, he would face challenges from within his own party and from a growing breed of young leaders who treated his idol Nehru as a bogeyman. After the anti-Muslims riots in Gujarat in 2002, Vajpayee wanted Modi to step down as the state’s chief minister at the April 2002 Goa conclave of the BJP. But he was outwitted by Modi, Advani and others through a dramatic move – Modi announced his intention to resign as CM at the start of the meet and his ‘proposal’ was met with cries of strong disapproval from the participants.

Vajpayee, who had made up his mind on the plane to Goa to axe Modi to please his coalition partners and retain his moderate image, beat the retreat sensing the groundswell of support for Modi within the BJP. In an apparent attempt to placate his aggressive comrades, Vajpayee even went on to make uncharitable comments at the Conclave’s finale against Muslims whom he said couldn’t live alongside others.

Nonetheless, the poet politician’s public persona remained unscathed. He also became the prime minister that a large section of Indians looked up to with great respect and affection, in stark contrast to other tall Hindutva leaders, past and present. That was because he was a consummate politician who knew the importance of love as an emotion in politics and was never averse to displaying it.

In Kashmir, some of the locals call him a Sufi thanks to his oratorical skills that struck a chord with the masses. Perhaps that was also because he tried hard to bring greater acceptability to a movement that shaped him by adopting the methods of outreach practised by his more secular rivals.

It is no wonder then that he won plaudits from some of his most bitter ideological opponents, including communists and Tamil icons such as CN Anna Durai who loved Vajpayee’s speeches. Vajpayee himself recalled in an interview to The Hindu many decades later, “I remember how, during a debate in the House in March 1965 on the language question Anna said, ‘What is our objection to Hindi? I want it to be very plain and very frank. We have no objection to any language. Especially when I hear my friend, Mr. Vajpayee speaking, I think that it is a very good language’.”

But with the BJP treading a new, aggressive path thanks to its majority in the Lok Sabha and expansion to more geographical turfs, Vajpayee has become a notional icon. His ways have long been given a burial by his younger comrades in arms.

At another level, he was a pioneer whose credentials cannot be excelled. Prime Minister Modi talks about the historical hesitations of the West in engaging with India having all but disappeared; in fact, such hesitations began to dissolve largely when Vajpayee was at the helm, having put the process of liberalization back on track.

His biggest achievement as prime minister, besides ushering in a cell phone revolution and making numerous attempts to normalise relations with Pakistan and other countries, was his role in rebuilding India through massive infrastructure development programmes.

Perhaps, he was lucky enough to be at the right place at the right time. He was also fortunate enough to have lived a full life, commanding love and respect from a wide spectrum of people till the very end. With his successors serving as stark contrast in word and deed, death has only deepened Vajpayee’s halo.