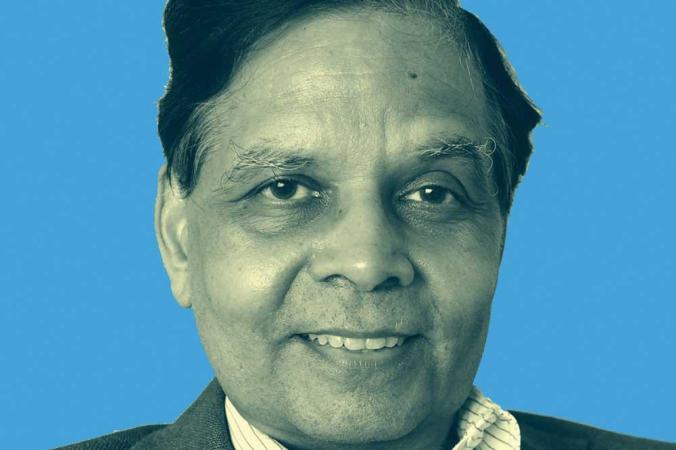 FOR MORE THAN a year in the run-up to the 2014 General Election, Arvind Panagariya had played a pivotal role in hardselling the Narendra Modi brand of ‘economics’ and reviving a debate over the Gujarat- versus-Kerala models. Along with his mentor, the trade economist Jagdish Bhagwati, Panagariya also locked horns with Nobel laureate Amartya Sen for what they called his ‘anti-growth assertions’. As early as 2012, the duo had already co-authored a book lauding the Gujarat model of development, which they argued was about growth and private entrepreneurship. In India’s Tryst with Destiny: Debunking Myths that Undermine Progress and Addressing New Challenges, the authors also insisted that it was a growth- oriented policy—the Gujarat model—that had delivered results even in Kerala, a state that had earlier been spotlighted by Sen and others for its successful redistribution policies and state-driven development.

Panagariya, then a professor of Indian economics at Columbia University, told me in an interview in 2013 that he was impressed by Modi’s economic policies, suggesting he had a problem with his politics. But in early 2014, after going through the Special Investigation Team report by former CBI Director RK Raghavan, the Rajasthan-born Princeton alumnus clarified that he had no quarrel with Modi’s style of politics. Panagariya soon began to pitch Gujarat’s then Chief Minister as India’s moderniser-in-waiting at global forums. In early 2015, Prime Minister Modi named Panagariya as vice-chairman of the National Institution for Transforming India, or NITI Aayog, which replaced the Planning Commission.

Two-and-a-half years on, as the economics professor steps down from NITI Aayog amid talk of differences with senior colleagues and in the face of attacks from Swadeshi politicians and trade unions affiliated to the ruling BJP’s parent, the RSS, for allegedly serving corporate interests, what stands out is Panagariya’s failure to adapt to a governmental role that required greater inter-personal skills and tenacity. For a person rooted in academia, Panagariya, who will return to Columbia University in September, couldn’t break out of his professorial mould and navigate the rough and tumble of Indian politics. “He is an extremely sensitive person,” says an associate in the organisation. The appointment of high-profile bureaucrat Amitabh Kant as CEO of NITI Aayog was meant to address leadership gaps and enhance coordination between government agencies and the new entity. However, other officials of the body aver that Panagariya worked in relative isolation, with the help of a few interns, and kept others in the dark about his plans. Incidentally, Modi is said to have offered Panagariya the RBI governor’s role after Raghuram Rajan’s exit, but he reportedly declined it saying he already held a cabinet minister’s position while the central banker had a minister-of-state’s rank. People close to the matter say Panagariya knew only too well he wasn’t cut out for that post, which required high people management skills.

Irascible on occasion, he had earned the wrath of the swadeshi lobby for his ‘Western-centric approach’. Bharatiya Mazdoor Sangh President Saji Narayanan has said he doesn’t wish to comment on any official’s exit, but his trade union wants the Centre to revamp the body and appoint people with ‘social consciousness’ to its helm. Rumours abound that Panagariya quit on hearing of a plan to replace him as NITI vice-chairman and name him chairman of the Prime Minister’s Economic Advisory Council. We wish him luck for his academic pursuits.