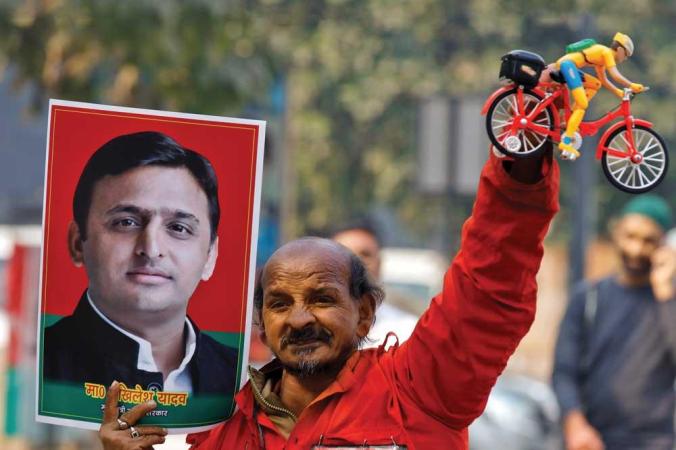 ON THE MORNING of January 16th, a day after his wife’s birthday celebrations, Akhilesh Yadav appears “downcast” to one of his suave ministers who called on the leader at his Lucknow residence. A senior editor who met him that day was also struck by the lack of “usual verve” in the man, who, at 43, is one of India’s youngest chief ministers—and the youngest ever to hold the position in the country’s most populous state. Another young Samajwadi Party (SP) minister who recently faced disciplinary action at the hands of Akhilesh’s intra-party rival, his own uncle Shivpal Yadav, said the Chief Minister may have been disturbed by the events that took place earlier in the day. His father Mulayam Singh Yadav, the patriarch with whom Akhilesh was locked in a battle for supremacy filled with intrigue and betrayal, had driven that morning to the party office on 19 Vikramaditya Marg, a road teeming with OB vans and reporters and named after a first-century ruler remembered as an ‘ideal king’, thanks to his generosity and patronage of the arts and culture. Yadav Sr, who lives on 5 Vikramaditya Marg, close to Akhilesh, vowed to fight his son and beat him in the tussle only to face loud slogans of ‘Akhileshji ki jai’, until Naresh Chandra Uttam, the SP state president who recently replaced Shivpal, appealed to the crowds not to say anything that would hurt the party’s founder. The youths relented and Mulayam left the sprawling office with the practised arrogance of a former wrestler, now 77.

A while later, as I watch, an excited band of Akhilesh supporters appears with a plaque and nails it beneath an older one on which is written in Hindi, ‘Mulayam Singh Yadav, National President’. The new one says, ‘Akhilesh Yadav, National President’. Party workers go on a sloganeering spree again, this time with renewed vigour. Soon, after seniors intervene, the cadres start chanting the names of both the father and son in an apparent effort to project unity within a party that has seen both camps—that of the father and of the son—engage in a slugfest over the SP poll symbol, the cycle. Mohammed Ahmed Siddiqui from Balamau Assembly constituency in Hardoi, among the hangers-on at the SP office, is of the view that Netaji loves his son to no end. “He is going to soon agree to Akhileshji’s proposals and there will be a united fight against fascist forces,” he says, staring at an open auditorium on the campus next to a large hall built in the name of the late socialist leader Ram Manohar Lohia. Devender Singh, who had come to the capital of UP from Mainpuri, a seat Mulayam has represented in the Lok Sabha several times, parrots the hope: “The father loves the son, and very soon there will be a solution.” He sees Netaji, as Mulayam is referred to even by son Akhilesh, as the ultimate leader. “But now for the survival of the party in the face of a threat from the BJP, Akhilesh must become the functional leader who will be mentored and guided by Netaji,” he avers. Is it all a game of love and intrigue, I ask an SP leader. “See, there was an issue, and now we are on the verge of solving it.” When I raise the show of defiance by Mulayam, he says, “I don’t think the father holds any grudge against the son. There were differences over some issues, that’s all.”

With people arriving in hordes from various parts of the state, as if to quench their curiosity of the ongoing drama within the party, I step out and head for the nearby home of UP minister Abhishek Mishra, who, unlike most others, is only ready to speak on the record. The IIM-A professor had made a foray into politics in 2012 when he won an Assembly election. Back then, he had expected that a new SP would dawn under Akhilesh’s watch. “Things have not changed at all,” he had told me a few months later, confirming that the ‘old SP’, led by Akhilesh’s father and uncles who patronised toughies across the state, was still calling the shots. Now, however, Mishra says that he never really had to work under the ‘old SP’, especially because he worked closely with Akhilesh. Here, it is inescapable: ‘Old SP’ is a metaphor for lawless governance and the ‘New SP’, the one steered by Akhilesh, is projected as a modern party led by a messiah of development, a strategy borrowed from the poll campaigns of Prime Minister Narendra Modi.

For more than a year, there were signs that the ‘New’ version was making a mark, with Akhilesh insisting on having his people in positions of power that mattered. He would soon find himself growing in popularity among party legislators and office-bearers. In a show of strength after fighting a no-holds-barred battle, sacking uncle Shivpal as state party chief and his men from crucial posts, Akhilesh had managed to parade for public view the support of more than 90 per cent of the state MLAs and a brute majority of the party’s higher echelons with the assistance of another uncle, Mulayam’s cousin Professor Ram Gopal Yadav.

Still, on the morning of January 16th, the Akhilesh camp, comprising politicians, bureaucrats and consultants, was worried. All the Chief Minister’s men, including the likes of Udayveer Singh, Arvind Kumar Singh Gope, Anand Bhadauriya, Pawan Pandey, Akshay Yadav, Dharmendra Yadav (who has lately grown close to Akhilesh) and Sunil Singh Yadav, were either tight-lipped, unavailable for comment or would only speak off the record and in hushed tones. Powerful bureaucrats, including Navneet Sehgal, principal secretary (Information) who had once been considered BSP chief Mayawati’s blue-eyed boy while she was CM and is now a key member of Team Akhilesh, refused to comment on the preparations that are afoot to cash in on the projection of Akhilesh as a development man. Incidentally, he has a poll war room in place led by Harvard strategists Steve Jarding and Adwait Vikram Singh; from here, they and their team of 170-odd volunteers, mostly women, coordinate campaign activities with over 10,000 people out in the field across regions where elections are to be held in the first few phases of the seven-phased exercise.

Read the rest of this article in Open magazine